Regular readers of my blog will know that I love to listen to a good audiobook. Sometimes even if the book has been out for a while.

Say, more than a decade.

Okay, maybe that’s more than a while, but still… with apologies to those who have already read The Shepherd’s Voice by Robin Lee Hatcher, I’m going to go ahead and review it, because I just finished listening to it, and enjoyed the experience a great deal.

This RITA Award Winning Inspirational Historical Romance was originally published in 2000, but I got my hands on a copy of the 2011 audio edition at my local library.  I’m so glad that I did.

If you are a fan of Robin Lee Hatcher’s novels or you enjoy historical romance where faith plays a central role, and you haven’t read this yet, you just might want to change that.

Set during the Great Depression in Ransom, Idaho, The Shepherd’s Voice tells the story of Gabe Talmadge and Akira Macauley. After 10 years in prison, Gabe cannot find work so he returns home out of desperation, hoping to find employment and maybe even acceptance from his father, a wealthy and influential man in the town of Ransom. But his hopes on that front are dashed when his father sends him away hungry and alone. Things begin to turn around when Akira offers Gabe a job on her sheep ranch and helps him regain his shattered faith and his hope for the future. But when tragedy strikes, his past comes back to haunt him.

This is a charming story featuring a number of Biblical truths exemplified. Redemption, mercy, love, salvation, forgiveness. It’s got it all. There’s a fair amount of scripture quoted in this one as well, as the characters explore how best to deal with the challenges they are facing from a Biblical viewpoint.

Did I mention challenges? They are facing plenty of those. Gabe’s father is scheming to take Akira’s land and undermine their relationship. Town gossips are doing what town gossips do. And an angry drunk seeks revenge. But the challenges and conflict keep things interesting from beginning to end, as does the constantly evolving relationship between Gabe and Akira. In the end, I was fascinated by how the various story threads come together in unexpected ways, and the reader sees how “all things work together for the good of those who love God.”

Specific to the Audio edition:

I thought that the narrator, Pam Ward’s voice had a peaceful, calming quality to it, which made for pleasant listening and seemed to suit the story well. She was adept at doing young and old, male and female voices, as well as introducing accents when called for. I found it easy to distinguish one character’s voice from another, and the voices seemed well suited to the characters.  Overall, an excellent audiobook experience and one I would gladly recommend.

Stress Test captured my attention from the start and wouldn’t let go. It’s the first title I’ve read by Richard Mabry and I’m looking forward to reading more by this talented author in the future. Highly recommended for fans of medical romance and medical suspense who haven’t already had the pleasure of reading it. And yes, I’m a little late to the review party, as this title was released a year ago, and there’s already a more recent title available from this author (Heart Failure), with yet another due out in April (Critical Condition). Still, I couldn’t resist adding my voice to the existing critical acclaim for this one.

As the story opens, Dr. Matt Newman’s life is on the brink of significant change, but the changes in store for him aren’t the ones he had planned. He’s working his last night as a private practice surgeon, about to embark on a new career in academic medicine, and contemplating proposing to his girlfriend. Instead, he’s attacked and kidnapped by people intent on killing him. He escapes with a head injury and wakes in the hospital ICU to find the police believe he’s not a victim, but a murderer. To top it off, his girlfriend breaks off their relationship, wanting nothing to do with the suspicions surrounding him. And his new job, likewise gets put on hold.

I have to admit, I have a soft spot for a novel featuring a handsome hero in distress, so Dr. Matt Newman was instantly appealing. I’ll also admit that the cover drew me in before I ever read a word. Just look at that cover. Doesn’t Matt look like he could really use a hug? I was curious to read his story, and within the first chapter, I was fully hooked. I cared about Matt and was rooting for him the whole way through.

The plot is full of suspense, danger, and unexpected twists and turns that kept me wondering. How could things possibly turn out well in the end? And who is behind the attacks against Matt and why? There’s also a thread of romance throughout the story, which I enjoyed. It was well written and proceeded at a believable pace.

Throughout the story we see Matt’s Christian faith grow from nominal to an important part of his life. As he faces the adversity into which he’s thrown he begins to learn to lean on God, and his interactions with Joe, Rick, and Sandra reinforce that and encourage him to continue to grow in his faith. I thought the faith element was handled well, coming across as genuine and not preachy.

I haven’t read many medical themed novels before, but I found the medical details fascinating. Richard Mabry did a great job orienting the reader by explaining unfamiliar terms and concepts without letting those details intrude on the story or slow the pace.

An electronic copy of this book was provided to me free of charge by the publisher, Thomas Nelson, via NetGalley, for review purposes. Opinions expressed in this review are my own. To read more of my reviews, articles, and writing updates, please consider subscribing to my blog at karencollier.com.

To learn more about author Richard Mabry, check out his Web site at www.rmabry.com or his blog at rmabry.blogspot.com. He can also be found on Facebook and Twitter.

Book review blogging is great fun.  I love spreading the word about a book I really enjoyed reading.  It’s also nice to get free electronic copies of some great books, often before they’re officially published, in exchange for writing honest reviews.  But the best part is that in the process, I’m learning a lot about what does and doesn’t work in a variety of published novels.  And that’s something that I can apply to my own writing. 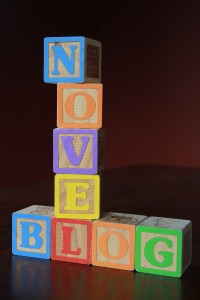 Trouble is, all this reading, blogging, Facebooking, and tweeting has seriously cut into the time I’ve been spending on actually writing my novel.  In fact, between you and me, there were six weeks straight during which I didn’t write a single word of my novel.

Not a good thing.

At first, I was trying to get ahead in my reading and blogging so I could be sure to post reviews and articles on a consistent weekly basis.  Then, as time passed without writing, the details on where I was in my novel and where it was headed began to fade, making it harder to get back into it.  And before I knew it, six weeks had passed without writing a single word of my novel.  Gasp!

This week, I decided it’s time to change that.  I re-read a half dozen chapters of my novel in progress to bring myself back up to speed on where my story is going.  And I’ve been making a point of devoting time to my own writing each day, regardless of what books are waiting to be read or blog posts are waiting to be written.  Best of all, the excitement for writing my novel is back.

Don’t worry.  This blog isn’t going anywhere.  I’m still here, still reading and reviewing, still writing articles.  But my novel is moving along again too.  A little bit at a time.  Yay!  I’m still trying to find the right balance, but I think I’m on the right track.

Anyone have any tips to share on balancing competing priorities or finding more hours in the day?  If so, I’m all ears.  😉

Patricia Bradley’s debut novel, Shadows of the Past, is a must read for fans of inspirational romantic suspense interested in discovering a fresh new voice. This book is first in the brand new Logan Point series as well as winner of the Daphne de Maurier Award and the Touched by Love Award.

Part romance, part danger, part mystery, this novel tells the story of psychology professor and victim profiler Taylor Martin’s search for her long missing father as well as her attempts to determine who is stalking her and sending threatening messages. Her prime suspect is a former student who happens to be the missing brother of Nick Sinclair, the handsome mystery writer she finds herself falling for despite her own fear of abandonment and his feelings of loss and guilt over the death of his late wife.

I thought the author did a great job keeping the story moving and maintaining a good balance between the romance, mystery, and suspense. I enjoy a good mystery, and was pleased to find that the clues you need for this one are all there if you’re paying attention, but cleverly camouflaged so as not to jump out and draw attention to themselves until the time is right. Then, when the ending is revealed, a host of seemingly unrelated pieces fall into place for a satisfying conclusion, where it all makes sense.

Besides the mystery, I thoroughly enjoyed the tender romantic moments between the hero and heroine. I thought the author did a great job fleshing out the characters’ personalities and backgrounds and that the pace and nature of their relationship felt natural to their situation. The chemistry was evident, as well as the internal conflict as each character struggled with his or her own uncertainties.

Many of the secondary characters were well developed and intriguing as well. I’m looking forward to seeing where the next book in the series will be taking us. I have high hopes for another great read. Meanwhile, kudos to Patricia Bradley on a well crafted and engaging first novel.

Thank you to the publisher for providing a free electronic copy of this book for review purposes as part of the Revell Reads program. My opinions are my own. If you’d like to read more of them, please consider subscribing to my blog.

To learn more about the author, connect with her on social media, or find some great discussion questions about this novel, check out the author’s Web site at ptbradley.com. And if you’re interested in reading this book, you’re in luck, because today is the official release date.