Having just finished writing a novel, I’ve been thinking a lot about story ideas and what to write next, so a bit of advice offered in a blog post I was reading jumped out at me.  It caught my attention partly because of its relevance to what I was thinking about at the time, but also because it appeared to be completely at odds with another bit of advice I’d read a few months prior that really resonated with me.  This sent me digging through my Twitter Favorites until I found that other post I remembered reading, so I could re-read it and compare the two posts side by side.

Now I’m wondering what others think on the issue of choosing to “spend” or “save” your best story ideas.  So please, check out these quotes and the links to the original articles, and then if you’re intrigued, come back here to discuss. 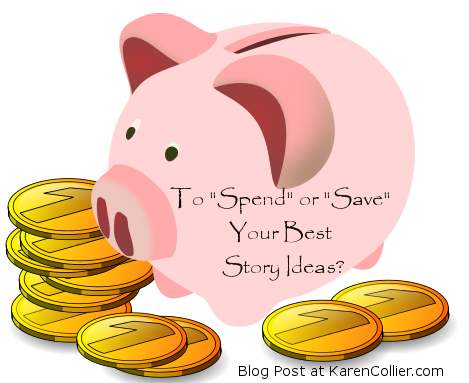 The more recent article is one advising new novelists not to worry if their earliest attempts don’t measure up to what they want to achieve.  It makes some great points about having to write novels in order to learn how to write novels well, and makes the very reasonable assertion that your first attempt will probably not be as good as future attempts.  Then it goes on to compare writing a novel to climbing a mountain or cutting a precious gem, and recommends waiting to tackle the really high mountain or the particularly valuable gem until your skills are equal to the task.

“If you’re not ready to write that really cool novel that’s pounding at you, demanding to be written, shelve it. Put it on the back burner. Pick your cliche, but set that story aside and begin with something simpler. Or just something that doesn’t matter as much. If you know that you’re not ready, that you don’t have the skills and insights, don’t try to write the story that you hope will compare favorably with your favorite author’s best work.” – Beth Hill’s “(Stop) Comparing Yourself to Successful Authors”

There are some great points in this blog post that I do agree with, and I’m sure there are some excellent reasons for shelving an idea to write later, but the concept of putting off writing an idea you love just because you’re not sure the result will live up to your expectations?  That bothers me.  I know I learned a lot over the course of writing my first (incomplete) novel that made my second (or first complete) novel significantly better.  And I learned a lot over the course of writing and editing my first completed novel that allowed me to see my first attempt a lot more clearly.  Someday (maybe next week or maybe in a few years) I’ll come back to edit and finish (or maybe completely rewrite?) that first attempt, because I do still love the premise.  I picked that idea in the first place for that very reason, because I loved the idea, whether I was ready to realize it fully at the time or not, knowing that it could be edited or rewritten later if necessary.

And that’s where I think the analogy to mountain climbing or gem cutting breaks down.  Writing a novel isn’t like climbing a mountain in that you could die or be irreparably injured in a failed attempt.  And it’s not like cutting gems in that a poorly planned or executed cut could destroy rather than enhance the value in your raw material.  Books can be edited.  They can be rewritten.  You can have as many second chances at that great idea as you want to take.  Or come up with new and better ideas.  But if you don’t try it and really give it your all, how can you know for sure what you’re capable of doing right now?

Which brings me to that competing bit of advice that struck a chord with me when I read it back in January, so much so that it stuck with me and came to mind when I read the more recent post.

“Don’t save your best storyline for later. Use it now. And what’s more, use the most intriguing characters you’ve ever come up with to people that tale. Keep a list of striking metaphors? Try and employ every single one of them in your current work in progress. Don’t skimp. Don’t save. Become a wanton spender of your creativity.” – Lisa Samson’s “Shoot the Wad”

Lisa Samson goes on to suggest, “If you live and love and take chances, if you open your eyes to the world not as you think it should be, but as it is, every single bit of it will soon be replaced.”

I hope she’s right about that, because for the book I just finished writing, I took her advice.  I used what I considered my best romantic suspense story idea, one that had been percolating in the back of my brain for months (while working on that other novel), and I ran with it, holding nothing back.

So far, so good.  I thoroughly enjoyed writing the story, and it got me through to the final stage in Harlequin’s Killer Voices contest and garnered a full manuscript request.  No word yet on whether I’ll be getting a contract, a rejection, or a revision letter, but whatever happens next I’m glad I chose to focus on an idea I loved because I think it allowed me to write the best story I could at the time.

Now comes the scary part.  No, I’m not talking about getting editorial feedback.  I’m looking forward to that, strange as it may sound.  I’m talking about coming up with another idea I love just as much for my next book.  Which is where Lisa Samson’s advice is a huge source of encouragement.  With thirty-four novels and three Christy Awards under her belt, her approach seems to have worked out well for her, and I’m hoping it’ll work well for me too.

I’m in the brainstorming phase right now.  I’m busy bandying about possible villain motivations, hero and heroine characteristics, internal and external conflicts, scenes, settings, and more, looking for just the right mix of pieces that will fit together and complement each other to make a complete story idea I can really get excited about writing.  Maybe (hopefully!) I’ll like it even better than my last one.

Now I’m curious.  What do you think?  Is it better to “spend” or “save” your best story ideas?  Or does it depend on the situation?

She Could Save Millions, or Save Herself.

She just needs a little longer. She’s really close. Dr. Rebecca Jackson, a medical researcher, stands on the verge of a breakthrough that will transform medicine. But she soon discovers the reason behind the miraculous progress in her research, and it leaves her with a nearly impossible choice . . . and little time to decide. More than her research is at stake. And more threatens it than this latest revelation. Something she’s tried hard to cover up. There is a high cost to some things in medicine and it’s not always the patient who pays. Can Rebecca find the faith and wisdom she needs to make the right call? The clock is ticking and the pressure is on.

Lip Reading offers a fascinating glimpse into the world of pharmaceutical research, while keeping the reader turning the pages to find out what happens next.  Its lifelike characters face moral dilemmas and unexpected plot twists along the road to a bittersweet, yet satisfying ending.  Fans of medical suspense won’t want to miss this one, and I’d also recommend it to anyone seeking a thought-provoking read.

Book group participants take note, as well.  There’s plenty of fodder here for a good discussion.  There’s the question of whether Becca or Mel is the more suitable match for Noah.  There are several discussable instances in the book where characters act against the wishes of another character… with that person’s best interests in mind.  With characters facing difficult choices with multiple right answers, it would be interesting to see members of a book group debate how different choices might have led to different endings to the story.  I know I spent more time than I should have trying to come up with alternative endings.

You’ll also find a set of discussion questions in the final book, though it didn’t appear in my advance reader copy.

I think that the part of this book I admired the most was the way its message about God’s grace was intrinsic to the characters’ personal growth and the situations they faced, rather than tacked on as an afterthought.  For example, Becca’s ah-hah moment near the end of the book seems realistically presented as a culmination of past influences throughout her life, and not just a spur of the moment decision in a moment of fear.  I enjoyed seeing how interactions in her past that seemed to have no impact at the time did have a major impact down the road.

The medical details included in the book were explained in such a way as to make sense to a non-medical reader, without the explanations intruding on the flow of the story.  I was thoroughly intrigued by the research problems involved in creating artificial blood, and wound up doing a Web search to find that researchers really are close to a solution.  How cool is that?  (Disclaimer: I did major in biology as an undergrad, so maybe my inner nerd is showing?)

Anyway, I found Lip Reading to be a thoroughly enjoyable story and gladly recommend it.  Thank you to the publisher, David C Cook, for providing me with an electronic copy through NetGalley for review purposes.  Opinions expressed are my own honest opinions.

Besides writing, author Harry Kraus is also a surgeon and medical missionary to Kenya.  To learn more about the author and his other books, check out his Web site at harrykraus.com.

I accomplished that thing I’ve wanted to do since I was a little girl.  That thing that had teenage Karen bicycling to the library on a regular basis to read Writer’s Digest magazine and every writing book she could get her hands on.  That thing that has grown-up Karen carving out time while the kids are sleeping or otherwise occupied to sit in front of a laptop and type, type, type.

All of it.  And edited it and sent it off to a publisher.  All in time to meet a very tight contest deadline.  As you might guess, I’m celebrating the accomplishment, whether this novel gets published or not (though of course, I hope it does).

A big thank you to all the friends and family who have been and continue to be a source of help and encouragement.  You know who you are, and you’re the best!

Now… if I get “the call” from an editor, saying she wants to publish my book… well, that would be the icing on the cake.  Since this book was entered in Harlequin’s Killer Voices contest for Inspirational Romantic Suspense novels, I should be hearing something, sometime between now and August 8th.  The suspense is killing me.  (Ha ha!)

I’ve also started digging into my sorely neglected to-be-read pile, and brainstorming ideas for my next novel.  Oh, and blogging again.  😉