I’ve already discussed some of my favorite reads from 2017, so today I’m following the Top Ten Tuesday topic and taking a look ahead to the books coming in early 2018 that I’m most looking forward to.

If I Live by Terri Blackstock
If I Run, Book 3
Contemporary Romantic Suspense from Zondervan
Audio from Brilliance Audio
Releasing March 2018

So those are ten of the books I can’t wait to read in the coming year. I’d love to hear which books appear on your most anticipated list here in the comments. Or, to see what books other bloggers are looking forward to reading, check out this week’s Top Ten Tuesday posts over at the Broke and the Bookish.

She’s determined to give her baby a better life. Could a Christmas miracle make it possible?

Not long after she receives the news in 1944 that her baby’s father was shot down in the South Pacific, Amelia Richards loses hope. Jobless and broke, she has nowhere to turn for help but her infant’s paternal grandparents. The only problem is, they don’t know that she–or their grandson–exists.

When Amelia discovers the family is wealthy and influential, dare she disclose the truth of her relationship with their son? Or could the celebration of the arrival of another unexpected baby nearly two thousand years ago be the answer to her dilemma?

This novella makes a lovely Christmas time diversion, and it’s a perfect length for this busy time of year. Enough story and substance to draw you in and give a dose of Christmas cheer, without the length to prove too much distraction for too long. The characters and their dilemmas were interesting and well developed for a book of this length. I found I cared very much how the story would end for them, and was fully invested from cover to cover.

I appreciated, even reveled in, the joyful outcomes by the end of the book. But when I looked back on how the characters got there, I found that the storyteller in me was a bit disappointed. I would have liked to see Amelia and her in-laws working toward a better solution to their dilemma, rather than settling on a miserable outcome, and relying on a surprise twist that’s completely outside their control to fix everything. That said, I am glad the surprise twist was there. I know that might sound like a contradiction, but with everything she’s facing in this book, Amelia really needs her happy ending!

I borrowed this eBook from my local library via Hoopla. I was not expected to write a review, but wanted to share my thoughts. 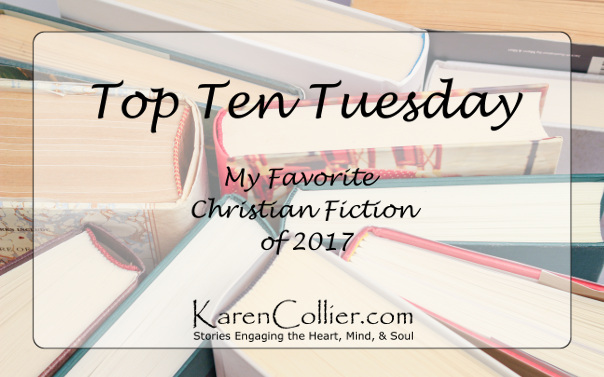 There have been so many amazing books this year, it’s been hard to keep up. In fact, I’m a bit later than I meant to be in posting this, because I wanted to squeeze in just one or two more books before making a final decision on my favorites for the year. Despite the delay, here is my Top Ten Tuesday post, with books listed in alphabetical order by author. I think my librarian roots must be showing….

Anyway, to see what other bloggers consider the best reads of 2017, check out the links over at the Broke and the Bookish blog. But before you go, I’d love to hear about your favorite books this year. Please consider sharing in the comments.

The last thing Search and Rescue helicopter pilot Kacey Fairing needs upon returning home to Mercy Falls, Montana, is to run into her mistakes. After a devastating crash during her recent military tour in Afghanistan, she is emotionally broken but ready to start putting her life back together. She just wants to reconnect with her teenage daughter and spend the summer working as the new lead pilot of PEAK Rescue in Glacier National Park.

But her mistakes aren’t so easily forgotten. Because Ben King is also back in town.

Country music star Ben King abandoned his past when he moved to Nashville thirteen years ago to start his career. He hoped to heal his broken heart, caused by losing the woman he loved. But when his father is injured, Ben is called home to help manage PEAK Rescue during his recovery. He doesn’t realize his father has ulterior motives until his old flame, Kacey, walks into his house and back into his heart.

Now, with Mercy Falls in a state of emergency due to flash floods, Kacey and Ben will have to work together to save lives. But when secrets are uncovered and old hurts rise to the surface, will they walk away again? Or can they find a different ending to their country love song?

Susan May Warren is one name that comes up time and time again in blog posts, recommendations, award lists and discussions about Christian fiction. But somehow, this is the first novel I’ve read of hers. Shhh, don’t tell anyone…. 😉

I’ve had the pleasure of meeting this author in person and hearing her speak at a Christian fiction writer’s conference, and I’ve been reading a nonfiction book she’s written about fiction writing called The Story Equation. And finally, now I can say I have read one of her novels. And found that, yes, it lived up to what I’d been hoping it would be. So you can imagine I’ll be playing some serious catch-up to make up for lost time in reading her other books, particularly the others already published in this series. Next up, Rescue Me.

But I’m getting ahead of myself. First, about this book. The people and relationships have a depth and emotional resonance that’s a hallmark of good fiction. The kind of story you can get lost in for hours at a time. The setting sounds lovely, and the community welcoming, the kind of place I’d want to visit in real life… preferably not during flooding or other natural disasters though, if I can help it.

Ben and Kacey make great leads for this story. They each have their own issues and complicated backstories, but they’re clearly better together. It was fun to watch them working through it all and toward their happy ending.

The secondary characters are intriguing as well, with unexpected depth. Some of my favorite scenes involved Sierra and Ian’s relationship. I’m very much looking forward to reading more about these and other secondary characters within the PEAK Search and Rescue Team in other books in this series.

In fact, when I read this book, I didn’t realize there was a novella preceding it in the series that’s about Ian and Sierra, earlier in their relationship. I went back and read that one immediately. So good! And it fleshes out the backstory for Ian and Sierra beyond what you get in this novel. So I’d recommend reading that novella, called If Ever I Would Leave You, first thing and then immediately diving into Wild Montana Skies and the rest of the series.

Thank you to the publisher for providing the complimentary copy of Wild Montana Skies that I won in a Goodreads First Reads Giveaway! Reading and reviewing it has been a joy.

Quick Links: About the Book | About the Series | Author’s Site