All her life, Hannah Sterling longed for a close relationship with her estranged mother. Following Lieselotte’s death, Hannah determines to unlock the secrets of her mother’s mysterious past and is shocked to discover a grandfather living in Germany.

Thirty years earlier, Lieselotte’s father is quickly ascending the ranks of the Nazi party, and a proper marriage for his daughter could help advance his career. Lieselotte is in love—but her beloved Lukas is far from an ideal match, as he secretly works against the Reich. Yet Lieselotte never imagined how far her father would go to ensure her cooperation.

Both Hannah’s and Lieselotte’s stories unfold as Hannah travels to Germany to meet her grandfather, who is hiding wartimes secrets of his own. Longing for connection, yet shaken by all she uncovers, Hannah must decide if she can atone for her family’s tragic past and how their legacy will shape her future.

I had the pleasure recently of listening to the audiobook edition of Secrets She Kept by Cathy Gohlke. This book has won a Christy Award and an INSPY Award, and this audio edition was a finalist for an Audie Award. Some impressive accolades, yes?

My impression? There’s vivid storytelling here, alongside close attention to historical detail, and the overall emotional impact is powerful. I loved the dual first person storylines and timelines, particularly the way the stories meshed and played off of each other. Hannah’s quest to understand her family’s past made an interesting modern-day frame for the story of her mother Lieselotte’s experiences during World War II. Questions are asked and secrets are gradually revealed to both Hannah and the reader throughout the course of the book in such a way as to deepen the emotional impact. Thematically, characters wrestle with issues surrounding forgiveness, and I thought the appearances by Corrie Ten Boom within the plot were a lovely touch, helping to drive home the book’s message in memorable terms.

Much as I admired and enjoyed reading this book, there was one aspect of the ending that bugged me. [Will try to be vague here so as not to spoil anything…] When all the secrets were revealed, I found myself skeptical that one character’s perceptions of another could have been so skewed in the way they were… despite the explanations given… and I didn’t really get why those misconceptions couldn’t have been corrected earlier. [Anyone else who’s read it feel the same way? Or am I maybe overthinking this?]

Anyway, while I can’t say this was my number one ranked read of the year, or my favorite title from this author (loved Saving Amelie so much!), I can say that this is an excellent book, well worth the read, particularly for anyone with an interest in World War II era stories.

The narrators for the audio edition did a great job conveying the story in an engaging and dynamic way. And yes, I did say “narrators” plural. There are two narrators for this story, one for each time period and its first person viewpoint character. That is to say, Suzy Jackson tells Lieselotte’s portions of the story set during World War II, while Morgan Hallett relates Hannah Sterling’s more modern-day rediscovery of the past. I felt this arrangement worked fabulously for this story. The two narrators have distinctly different voices and styles, which seemed well matched with the personality of the main character they each portrayed. As an added benefit, when returning to the audiobook after a break in listening, it was easy to tell within a brief soundbyte which time period and which character’s world we’re visiting, simply by recognizing the voice of the narrator. Overall, a great listening experience, and highly recommended.

Thank you to Recorded Books for providing a complimentary copy of the audiobook for review purposes.

About the Book (publisher’s description):

Increasingly wary of her father’s genetic research, Rachel Kramer has determined that this trip with him to Germany—in the summer of 1939—will be her last. But a cryptic letter from her estranged friend, begging Rachel for help, changes everything. Married to SS officer Gerhardt Schlick, Kristine sees the dark tides turning and fears her husband views their daughter, Amelie, deaf since birth, as a blight on his Aryan bloodline.

Once courted by Schlick, Rachel knows he’s as dangerous as the swastikas that hang like ebony spiders from every government building in Berlin. She fears her father’s files may hold answers about Hitler’s plans for others, like Amelie, whom the regime deems “unworthy of life.” She risks searching his classified documents only to uncover shocking secrets about her own history and a family she’s never known.

Now hunted by the SS, Rachel turns to Jason Young—a driven, disarming American journalist and unlikely ally—who connects her to the resistance and to controversial theologian Dietrich Bonhoeffer. Forced into hiding, Rachel’s every ideal is challenged as she and Jason walk a knife’s edge, risking their lives—and asking others to do the same—for those they barely know but come to love.

Saving Amelie is a powerful look at how individuals are impacted and their characters are shaped by the circumstances they face and the people they encounter. It also explores God’s grace, and His provision through people willing to serve Him by helping others, even at risk to themselves.

This book takes place in Germany against the backdrop of World War II, and brings to light details of the eugenics movement of the time period, as well as the plight of the physically handicapped under that regime.

The Amelie of the title is a young girl, deaf since birth, whose need to escape the country propels the story forward. But it’s Rachel, a privileged American woman visiting Germany with her father, whose life and whose character changes most dramatically over the course of the story.

“She did not believe in God – had been raised to view such belief as a crutch for the weak. And she, a member of the elite, was not weak. But for the first time in her life she wished she did believe. She knew she was weak, and she needed help.” (page 96)

And that’s just the beginning of Rachel’s faith journey. I was impressed with the gradual and subtle way such deeply meaningful changes could be presented. But it’s not just about Amelie and Rachel. Over the course of the story, Rachel, Jason, Lea, Amelie, and a whole cast of other complex and interesting characters lend their points of view to the telling of this emotionally moving tale.

I was particularly impressed by the historical details included throughout this story, some of which I was previously unfamiliar with. I have to say that after “meeting” the theologian Dietrich Bonhoeffer through his fictionalized appearances in this story, I am curious to learn more about his life and writings.

I highly recommend this book to book discussion clubs and individuals looking for a thought-provoking, faith based story. The characters and historical detail in this one make for a fascinating read.

Thank you to Tyndale House for providing a paperback copy free of charge. 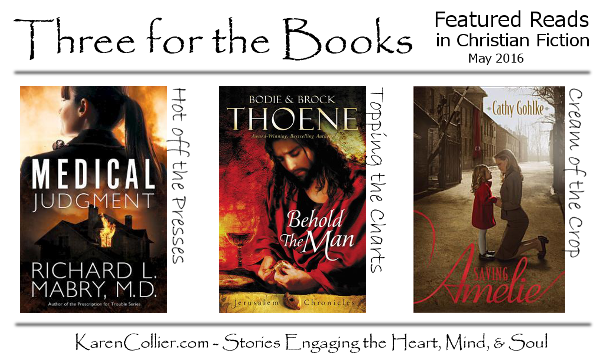 Medical Judgment by Richard L. Mabry, M.D. releases this month from Abingdon Press. This medical thriller is available in electronic and print editions.

Behold the Man by Bodie and Brock Thoene appears on the May CBA Bestsellers list in the historical fiction category. It is third in the Jerusalem Chronicles series, following When Jesus Wept and Take This Cup. It’s available from Zondervan in electronic, print and audio editions.