She’s Worth Fighting For

This novelization of a major motion picture (Fall 2016) by Joel and Luke Smallbone of GRAMMY Award-winning band For KING & COUNTRY is a powerfully compelling, suspense-filled love story that reminds us that no matter who we are, what we’ve done, or even how far we’ve gone astray, we are of infinite worth in God’s eyes.

The powerfully compelling novelization of the major motion picture by Joel and Luke Smallbone of the band for King & Country. James Stevens was, at one time, a good man with a great life. After the tragic death of his wife and losing custody of his little girl, James is at the darkest crossroad of his life. Angry, desperate, and unable to hold down a steady job, he agrees to drive a box truck on a shady, one-time trip cross country for cash—no questions asked. When he discovers what he is delivering is actually a who, the questions in his mind begin haunting him mercilessly. James becomes an unlikely hero who must fight to save the lives of two young women and finds himself falling in love with one of them. Can love, strength, and faith redefine his past and change the course of his future?

This book is quite an eye-opener on the subject of human trafficking in the United States. It tells the heartbreaking story of two young sisters trapped in a situation they never would have chosen, and the lengths to which an unlikely hero will go to help them escape. It also offers a powerful reminder that we are each priceless in God’s eyes.

The story itself was well told from multiple perspectives that draw readers emotionally into the story and help us to see the kind of thing that could be going on closer to home than we might think. While the subject matter can be difficult to face, I thought the authors dealt with it in a tasteful way, raising awareness without becoming overly graphic or explicit.

Suspense builds throughout the story as characters and readers become aware of what’s going on and as the stakes continue to rise, right up to an adrenaline-powered climax. The story ends with what I felt was an emotionally satisfying conclusion.

While the book’s description calls it a love story, the romantic element seemed to me to come a bit out of left field in the last chapter. The romantic in me would’ve liked to see that relationship develop a bit more on the page rather than between the chapters. But I can’t really complain, as the romance in this story really is secondary to the other plot elements and to the overall theme.

I haven’t seen the movie yet, but would be curious to see how this story plays out on the big screen.

The audiobook features not one, but two narrators, which I think is a fabulous idea and works particularly well for this story. David Atlas reads the scenes told from James Stevens’ perspective, while Nora Hunter reads the scenes featuring Antonia and Maria. Each narrator did a great job of drawing me into the perspective of his or her viewpoint characters. The emotion of the story comes through in their voices, and the reading pace felt just right.

I was pleased to find this audiobook available electronically from my local library via Hoopla.

Quick Links: About the Audiobook | About the Movie | Author’s Site

Eyes Wide Open is a real page turner with cliff-hangers and plot twists around every corner.  The story kept me guessing from beginning to end, and I enjoyed every minute of it.

What It’s About (from the back cover):

My name is Christy Snow. I’m seventeen and I’m about to die.

I’m buried in a coffin under tons of concrete. No one knows where I am. My heart sounds like a monster with clobber feet, running straight toward me. I’m lying on my back, soaked with sweat from the hair on my head to the soles of my feet. My hands and feet won’t stop shaking.

My name is Christy Snow. I’m seventeen. I’m about to die.

So who are you?

In a return to the kind of storytelling that made Black, Showdown and Three unforgettable, Ted Dekker drags that question into the light with this modern day parable about how we see ourselves.

Humming with intensity and blindsided twists, Eyes Wide Open is raw adrenaline from the first page to the last — pure escapism packed with inescapable truth.

Not all is as it seems. Or is it? Strap yourself in for the ride of your life. Literally.

Let me start by saying that the cover of the paperback edition is way cooler in person than it appears on your screen.  You know those holograms that you turn side to side and the picture changes depending on the angle you’re viewing it from?  Well the glasses on the cover of this book have reflective bits that show a rainbow of colors as you change the angle you view them from, much like you might see from actual broken glass.  I thought that was a nice touch. 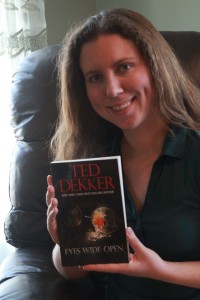 Yes, I read the actual paperback.  Despite the fact that I most frequently read fiction on my Kindle, and despite the innovative episodic way this book was released in electronic format, I read this one the old-fashioned way.  Why?  Because I won an autographed copy through a Goodreads contest.  I cannot tell you how surprised or how pleased I was to win it.  But, since a picture is worth a thousand words, here’s a selfie of me holding my plunder.

Wait.  Can you call it a selfie if you use a tripod and the camera’s self-timer function?  Hmmm… I’ll go with yes for now, but that’s really neither here nor there, is it?

Sadly the hologram effect doesn’t show up in this picture either.  Oh well.  You’ll just have to take my word on that for now.

A little background on this book before I go into more detail on what I liked about it.

This title is the first in the Outlaw Chronicles by Ted Dekker, which, at this point, also includes Water Walker and Hacker.  Sources say you can read them in any order, though they do share a common character who is introduced in an earlier book called Outlaw.  It’s worth noting that Outlaw recently won the Christy Award in the Suspense category.  I have not previously read any of these other titles, but I have to say, having finished this one, I’m tempted to track down copies of the others as well.

Eyes Wide Open consists of four parts – Book 1: Identity, Book 2: Mirrors, Book 3: Unseen, and Book 4: Seer.  These parts were originally released (in ebook form) episodically over a period of weeks, and the full collection is now available as a single title in electronic, paper, and audio editions.

Book One is also still available as a free download.  Be warned.  It’s designed to hook you into buying the rest… and it’s effective.

This book explores the concept of identity through the experiences of two likeable teen-aged characters placed in a situation where neither they, nor the reader, can be sure just how much of what is happening is real and how much isn’t.  Dekker does a great job keeping the level of suspense high and allowing the uncertainty to grow throughout the book, until finally revealing the unexpected ending.

The allegorical approach this story takes got me thinking about familiar concepts and ideas in new ways, which turned out to be a lot of fun.  Yes, this is Christian fiction, but you might not see it until near the end.  Take one part Twilight Zone for the bizarre situation the characters find themselves in, one part Chronicles of Narnia for the Christian allegory, and add a big helping of suspense of the cliff-hanger and unexpected-plot-twist variety, and you’ve got a general idea what to expect.  I did not want to put this book down, and when I did, I couldn’t stop thinking about it.  Highly recommended.