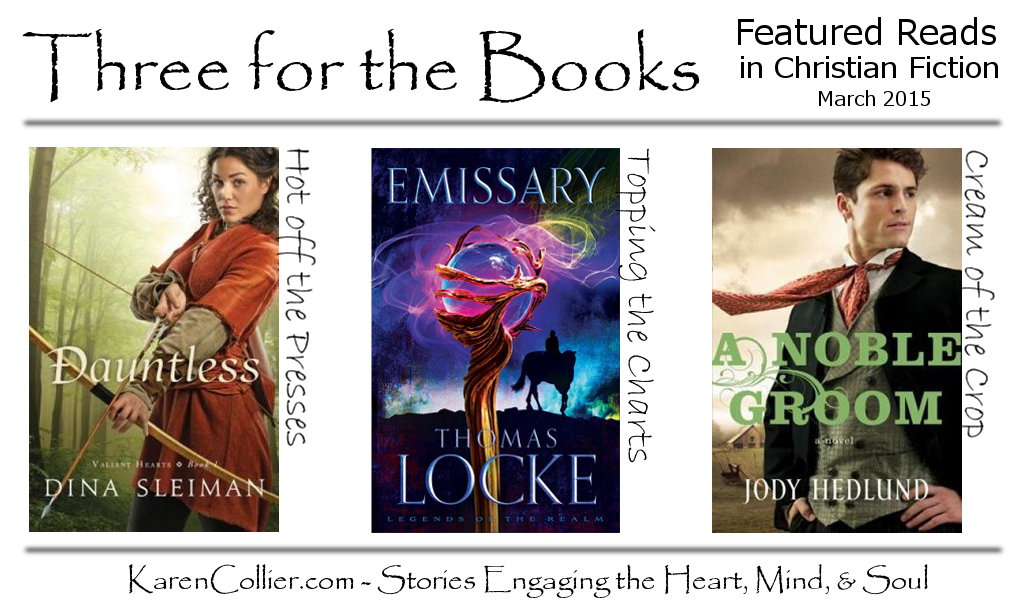 About the Book (from Publisher Bethany House):

Where legend and history collide, one young woman will fight for the innocent.

Born a baron’s daughter, Lady Merry Ellison is now an enemy of the throne after her father’s failed assassination attempt upon the king. Bold and uniquely skilled, she is willing to go to any lengths to protect the orphaned children of her former village – a group that becomes known as “The Ghosts of Farthingale Forest.” Merry finds her charge more difficult as their growing notoriety brings increasing trouble their way.

Timothy Grey, ninth child of the Baron of Greyham, longs to perform some feat so legendary that he will rise from obscurity and earn a title of his own. When the Ghosts of Farthingale Forest are spotted in Wyndeshire, where he serves as assistant to the local earl, he might have found his chance. But when he comes face-to-face with the leader of the thieves, he’s forced to reexamine everything he’s known.

Want to browse some more Christian fiction titles releasing this month? NovelCrossing and SoulInspirationz both feature lists of new releases, among other interesting things related to Christian fiction.

Emissary by Thomas Locke (Revell, January 2015) appears on this month’s CBA Bestseller List in the Fantasy/Sci-Fi category. It’s Book 1 in the Legends of the Realm series. Here’s the review I shared in January.

About the Book (from Publisher Revell):

In a world where magic has been outlawed for centuries, one young man discovers that he possesses powers beyond his wildest dreams. But he does not realize how pivotal this gift will be in the days to come.

To learn more about this book, check out the publisher’s full description, the book trailer, or my review.

To see what other titles are hot at the moment, check out the Bestseller Lists for Christian fiction.

A Noble Groom by Jody Hedlund (Bethany House, April 2013) won both the INSPY Award and the Carol Award for Historical Romance in 2014. It’s Book 2 in the Michigan Brides series (which starts with Unending Devotion).

About the Book (from Publisher Bethany House):

Annalisa Werner’s hope for a fairy tale love is over. Her husband failed her in every way and now his death has left her with few options to save the family farm. She needs a plentiful harvest. That, and a husband to help bring it in. Someone strong, dependable. That’ll be enough. A marriage for love…that’s something she’s given up on.

So her father sends a letter to his brother in the Old Country, asking him to find Annalisa a groom.

Then a man appears: Carl Richards, from their home country of Germany and a former schoolteacher – or so he says. He’s looking for work and will serve on the farm until her husband arrives.

With time running out, she accepts his help, but there’s more to this man than he’s admitting. He’s also gentle, kind, charming – unlike any man she’s ever known. But even as Carl is shining light into the darkness of her heart, she knows her true groom may arrive any day.

To find more titles among the “Cream of the Crop” check out my list of some of the big awards in Christian fiction, with links to the awards’ Web sites, where you can track down some more winners.

Now it’s your turn, reader friends. Have you read any of these titles? Do you want to? Are there any other titles you’ve read recently that deserve a shout-out? Please speak up in the comments!

3 thoughts on “Three for the Books: Featured Reads in Christian Fiction, March 2015”