If you’ve been following my writing journey thus far, you know that I’m approaching the end of my first draft of my first novel.  (Yay!)

But I’ve put that on hold for a while to plot murder and mayhem (the fictional variety of course). 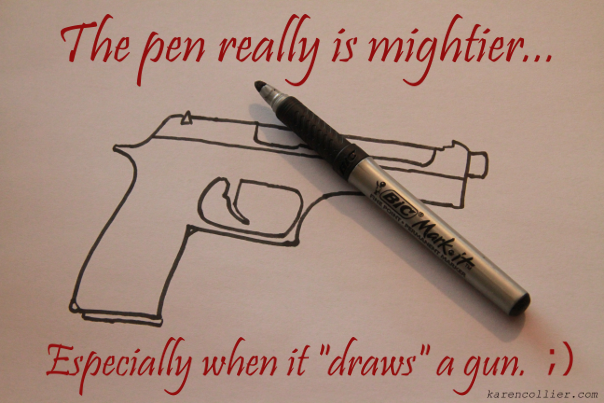 Which is to say, Harlequin’s Love Inspired Suspense (LIS) line is having a contest that they’re calling “The Search for a Killer Voice” (Twitter hashtag #KillerVoices).  The contest is designed to find talented new authors of inspirational romantic suspense, who just might wind up with publishing contracts with LIS.  At first, I was hesitant to enter because I didn’t want to set aside my first novel until it was complete.  But the more I thought about it, the more I came to realize that my first novel will still be waiting for me when I get back to it.  And this opportunity was one I simply could not refuse.

See, the idea I’ve had for my second novel, that’s been percolating for a very long while now, is one I want to target for the Love Inspired Suspense line.  And this contest is just the nudge I need to get it written.

Best case scenario, it may catch an editor’s eye and garner a contract offer (which would be AWESOME!)  And if I don’t make it that far in the contest?  No harm done.  I may even get some helpful feedback from the editors along the way that could benefit my writing in the long run.

So yes, I entered the first page of my next novel, and now I’m waiting with bated breath for the editors to announce which entrants will be advancing to Stage 2 of the contest.  Supposedly the decision has already been made, but we’re being kept in suspense until March 28th.

Meanwhile, I’m reading, plotting, and writing at an intense pace, because the deadlines in this contest are no walk in the park.  Unless that walk in the park happens to take place while pursued by a serial killer….  😉

That, in and of itself, could make this contest worth entering, for the productivity boost that comes with a deadline!

As an aside, I’ve really enjoyed plotting the suspense in this book.  It feels kind of like playing both sides of a game of chess, where the stakes are life and death.  The mental exercise of considering what villain, hero, and heroine would do, and how each would respond to the other players’ moves, as well as how they would each expect the others to respond has been intense.  And a whole lot of fun!

So tell me, how do you feel about deadlines?  Appreciate or dread?  Or somewhere in between?